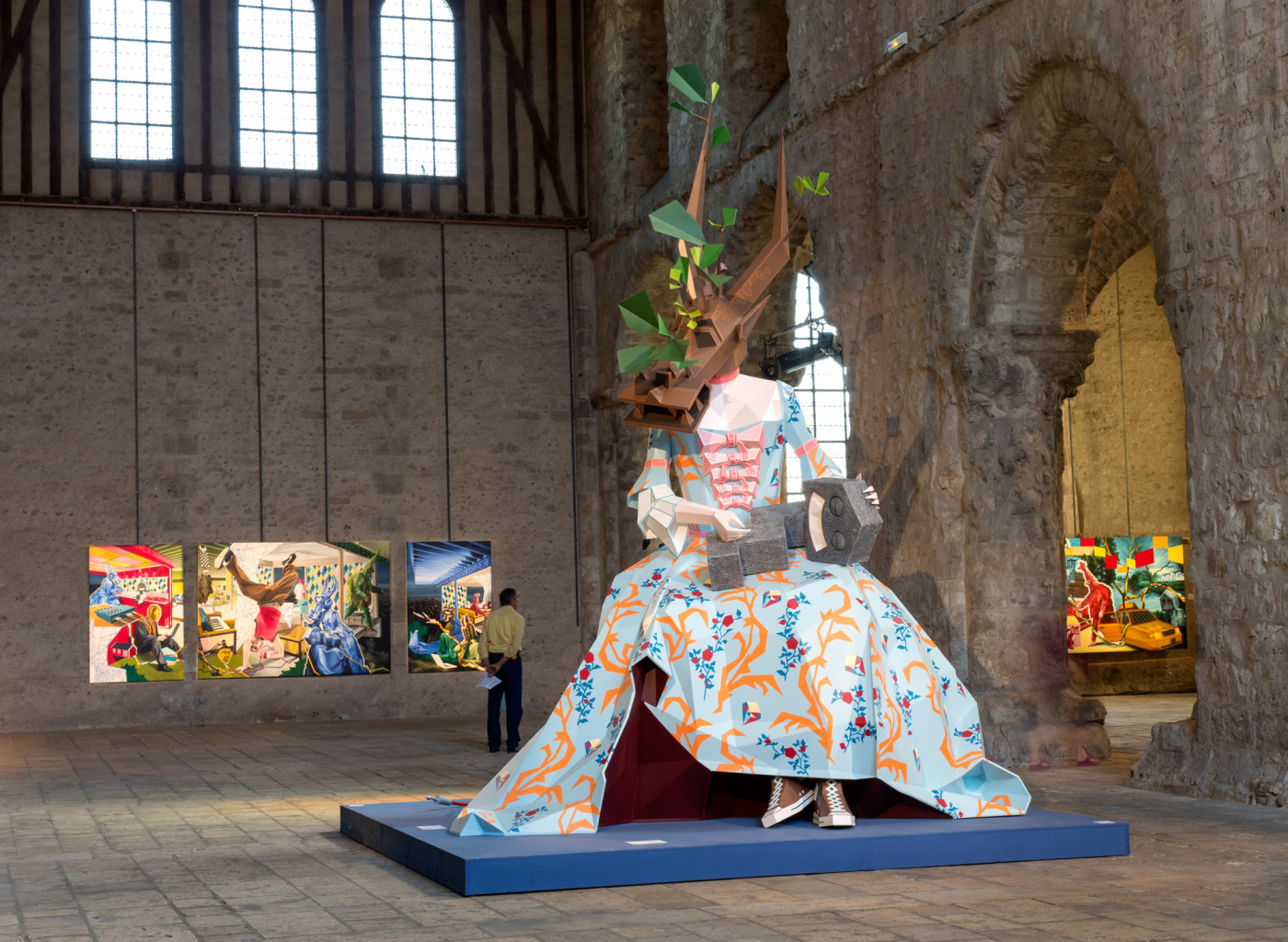 MASKARADE
The exhibition Maskarade is centred on a number of paintings whose recurrent theme is the mask and a monumental sculpture called Katielo. We re-discover Fuzz, a polymorphous animal, emblematic of the artist’s work, as well as several of the characters who have been present in his work from the beginning. In this latest series of pictures, Kriki brings some new characters onto the stage, characters such as Bwaba the Leaf Man, Bobo the Fibre Man, or The Songyé Pompadour and The Breakers, all inspired in African ritual, classical Western art, hip hop culture and robots with the android Topo. This surprising iconographic mixture, surprising both in its aesthetic sources as in its engagement with the reality of contemporary art, displays the originality and ambition of painting which lies on the border between Subculture and High Culture. Kriki gives precise roles to each of the figures as they emerge from the de-structured spaces of architects’ villas, open to an outside which is being constantly re-created. The presence of jacks continuously weaving through the body of work for more than twenty-five years symbolise the desire to connect all the fundamental elements of the picture with each other. The exhibition Maskarade knits Kriki’s visionary worlds together, where his own connective and pictorial language becomes a universal language.

The window… A few steps from the Collegiate Church of Saint-André, in Chartres Cathedral, hundreds of stained glass windows can be seen, almost all of them inspired by the liturgy. The generous donors who, in the XIIIth century, financed the reconstruction of the cathedral, and therefore the making of the windows, were the fraternities and guilds. In return for their donations, carpenters, joiners, labourers, wine-makers, masons, stone masons, drapers, furriers and bakers are given a central place in the many scenes depicting daily life. This collection of small scale scenes provides us with a lively picture of XIIIth century society. Echoing these images drawn from the Middle Ages, Kriki provides us with another living painting, a painting drawn from the beginning of our XXIst century giving an account of his times with its symbols, clothes: robots, hip-hop culture, architect-designed villas, high-tech furniture, but also of a period rich in the mingling of cultures and respectful of its past.

Kriki tells the story of his own times in his canvases, which some might see as stained glass windows, with sharply defined close fitting shapes, playing confidently with geometric forms, perspective, depth, and playful contrasts.

Light… In this Collegial Church, the natural light (changing as the daylight hours pass) is not filtered by stained glass but enters “raw”, depending on changes in the weather…but can it change our perception of Kriki’s world? Because a different kind of light is born from his paintings, imposing itself on us, seeking to penetrate our consciousness.

Martine Vallée
The sculpture “Katielo” is an event, Kriki creates a spectacle! From the outset, this monumental work, specially designed and created for the Collegial Church in Chartres, sets in motion a dialogue with this historic site. It is rare to find an artist of Kriki’s generation producing such impressive sculptures for a wide public. That is why a partnership with the history of the site nevertheless at the same time provokes an inevitable debate with the history of contemporary art! “Katielo”, a name taken from the cosmogony of the Senoufo tribe in Mali, refers to the sacred mother goddess of the forest. Its message is both theological and anthropological. We should note however that the source of the sculpture’s conceptualization, the cosmogony of the Senoufos, was unknown to Kriki who at this period is attempting to radicalize his key conception of African masks whose wood is beginning to revive. This botanical term, revive, regrow makes sense by giving new life to the inert wood of which sculpted masks are made, leading to the propagation of a new idea of sullen germination to the work in each of his paintings. Powerfully immersed in Kriki’s connective sensibility, “Katielo” plays with the relationship between visible and invisible, between the mask and what lays behind. As a result, the impact of this surprise blossoming at the upper extremities extends imperceptibly over the entire sculpture, over its entire body! The unexpected and already invasive appearance of these large green leaves, of shiny new shoots, give credence to the existence of a rhizome like matrix at Katielo’s sneakered feet. Charles Péguy wrote: “Just as when flowering fails, the generative force gives up the game to begin anew from below, at the sources of the sap which are still alive…”. But “Katielo” is also a kind of identity card of someone who still represents punk culture. This strange sculpture certainly bears witness to that, where an artist crystallizes a flippant and powdered 18th century with an African Pompadour in sneakers, caressing a Fuzz asleep on its knees, as a Virgin might stroke her Child, kind and loving in a sacred and definitely solemn place, sitting on an amplifier waiting for the jacks and other Larsen effects in readiness for a concert.
It was only when searching for a name that Kriki came across the Senoufo word “Katielo”; baptised thus, this sculpture, as improbable as it is strange, slips beneath the senses in two aspects, from the plastic and from the intellectual point of view. By planting Katielo like throwing a seed into the centre of the Church, Kriki creates a stir in the possible emergence of novelty, proceeding by a process of metaphorical bifurcations in the deployment of the young leafy twigs. The inventive radicalism of the artist, combined with his way of working by a process of tree like growth by division, brings him close to the words of the philosopher Michel Serres: “Just as a branch emerges from the stem, so novelty emerges from form”. Maskarade masks nothing…